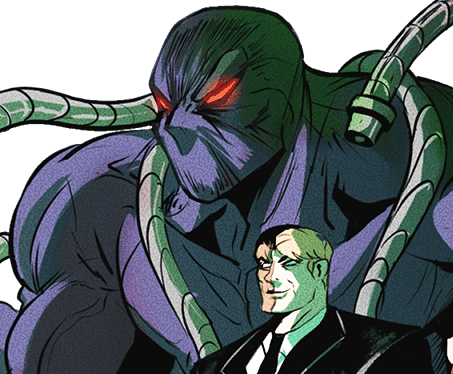 Nero & Freak
Nero & Freak
"The president Will B. Nero!"
Introduction
Wilheim B. Nero is a presidential candidate for the incoming presidential election of the United States. His popularity among all democraphics almost guarantees his victory. As a one of the richest people on Earth, he is the only person commanding more than 15 multinational companies, and have founded a total of 3 trillion-dollar companies. With a sphere of influence already larger than most countries, his powers can only grow.
Gameplay
Difficulty: Hard
Although strong, the presidential candidate persona of Nero cannot engage in battle for fear of ruining his public image. Thus, he is always accompanied and protected by his bodyguard.

As a player, you will play as the Nero's bodyguard for some time, before you can transform into Freak and wreak havoc! Although the bodyguard is very weak compared to other characters, Freak is incredibly strong. The difficulty of playing Nero comes from handling and understanding both characters, although they are not difficult to play individually.
Relationships
Freak
Nero's secret identity is the supervillain named Freak.
ANDIT
Sign Up Login DISCORD Leaderboards
Bandit.rip Guide Bandits About Privacy Patch Notes v.1.1.01